back to our team 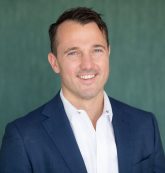 Chris has over ten years’ experience and running high-profile campaigns featuring some of the world’s biggest brands and most recognised faces. He also holds a world-record for being the youngest coach (25) to win a FIFA World Cup Qualifier, which he did when coaching Tonga.

Chris returned to Boxing Clever after 12 months in London where he consulted to some of the world’s most influential consumer technology and fintech brands including Microsoft, Lenovo, Honeywell and eToro. During this time he launched eToro’s new investment platform in the UK, Russia and Europe; developed a Lenovo-wide communication strategy that brought B2C, B2B and digital communication together under a common strategic framework, and managed an inhouse team.